The “high school jerk” is a staple of any great teen comedy. We love to hate them. Even Varsity Punks will have its very own cocky, trash-talking bully-jock. So to celebrate that archetype Varsity Punks brings you the Top 7 High School Movie Jerks.
7.) James Spader, Pretty in Pink 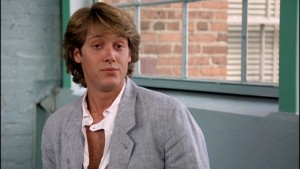 Well, he plays a guy named *Steff*–that’s his first problem right there–and his whole vibe is like the J. Crew catalog mixed with the opening credits to Miami Vice. His hair is highlighted and winged like an angel, but he’s still a king amongst douchebags. He looks like he wouldn’t let a girl touch his junk unless she wore a special pair of white linen gloves from Ralph Lauren.
6.) AMH, Edward Scissorhands 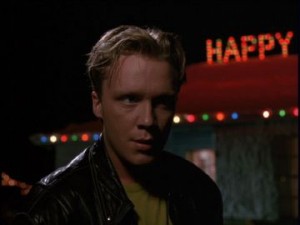 Anthony Michael Hall in Edward Scissorhands. From playing the ultimate 80’s nerd to looking like the Guy Most Likely To Put Something In Your Drink.
5.) Chris Hargensen, Carrie

The mastermind of the famous bloodbath! They can remake “Carrie” as many times as they want, but they’ll never get this 35-year old-looking superbitch right!
4.) O’Bannion, Dazed and Confused 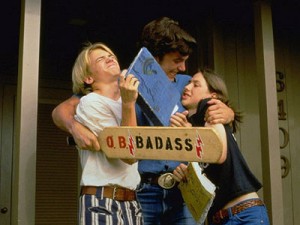 This is the bully to thank for all the copycats who made paddles in shop class and carried them around!
3.) Regina George, Mean Girls

Every horrible chick you’ve ever met wrapped into one who dresses like an extra from Clueless!
2.) Johnny Lawrence, Karate Kid

He has more money than you, he’s prettier than you, and he’ll kick your ass. The odd thing is…we kinda like him. I don’t know if it’s his perfectly fluffy hair, his cool skeleton costume, or his karate headbands.
1.) Biff, Back to the Future 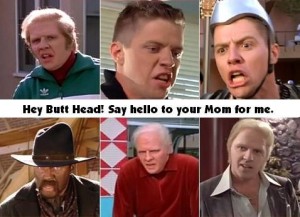 Mother. Effing. BIFF. Through time and space, now and forever, the undisputed ruler of them all–Biff. Sexual Harasser. Bully. Subscriber to “Ooh La La”. The King of Alternate 1985. Hello, McFly!!
Agree? Disagree? Comment below with your own nominees!