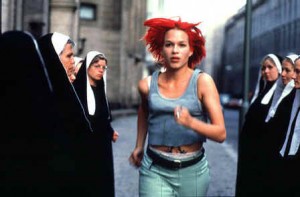 MOST running movies suck! That’s right; you heard it here! Why do you think that before “McFarland, USA” came along people always referred back to “Chariots of Fire” (1981) or “Loneliness of the Long Distance Runner” (1962) to talk about great running movies? That’s why we’ve mixed up our list of our favorite “Top 7 Running Movies” with movies that are not necessarily about sports…

No other movie highlights the adrenaline of running in such a cool, visceral way. Tom Tykwer’s stylized film is a true art piece where a cute German chick with bright red hair runs, runs, and runs to save her love. Fueled by a techno soundtrack, and a charming tireless heroine, RLR stands at number 1.

Although it might feel dated for the youngsters, no other film has captured the poetry and artistry in running like COF. It’s a religious experience, it’s a personal statement, it’s sublime! “I believe God made me for a purpose, but he also made me fast. And when I run I feel His pleasure.” -Eric Liddell

Prefontaine, the James Dean of running, is the coolest icon of the sport. A true varsity punk who did things his way — from his tenacious front-running style to his outspoken challenge against regulations of amateur status. Without Limits captures his legend the best.

This cult classic plays out like a nightmare where you can’t seem to outrun the villains who continue to pop out from every corner. This gang of 9 have been framed for the murder of another NYC gang leader. Now all the gangs in town are out to get them. They got no guns or car; they got no choice, but to run!

A seminal film of British Cinema at the time about a rebellious youth who takes up running in reform school. He’s totally a varsity punk. Stick it to the man through running.

I spite this movie for 2 reasons: 1) It’s the reason smart asses like to yell, “Run Forrest Run” at us runners; and 2) It beat out Pulp Fiction and Shawshank Redemption for the Oscar, which is complete bulls##t! That aside, Forrest does succeed and prevail as a hero because of his perseverance and stamina to keep going!

The newest addition to the list. It’s a celebration of culture and community about a small town cross country team that outruns their odds. The heartfelt moments and inspiring underdog story have earned it this honor.

We recently came across this on Netflix, and were surprisingly delighted. It’s a poem to running shoes. An Iranian boy loses his little sisters shoes, so now they must share shoes he has to run to school everyday to avoid trouble. In the end, he hears of a big “all-city” race where the 3rd place prize is a new pair of shoes. Well, guess who’s been training. It’s a gem of foreign cinema and poetic portrait of shoes, brother-sister bonds, and of course…running.